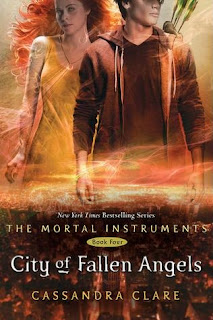 Hey everyone! Today I've got a review of Cassandra Clare's very anticipated novel, City of Fallen Angels. I never posted my review of the previous three books in the series, but before I give you the summary of COFA, I want to tell you that the series is AWESOME. Paranormal heaven, really. Badass shadowhunters, sexy boys. Dear lord, you need to read them if you haven't already! Anywho, a description of City of Fallen Angels is here:

City of Fallen Angels takes place two months after the events of City of Glass. In it, a mysterious someone’s killing the Shadowhunters who used to be in Valentine’s Circle and displaying their bodies around New York City in a manner designed to provoke hostility between Downworlders and Shadowhunters, leaving tensions running high in the city and disrupting Clary’s plan to lead as normal a life as she can — training to be a Shadowhunter, and pursuing her relationship with Jace. As Jace and Clary delve into the issue of the murdered Shadowhunters, they discover a mystery that has deeply personal consequences for them — consequences that may strengthen their relationship, or rip it apart forever.
Meanwhile, internecine warfare among vampires is tearing the Downworld community apart, and only Simon — the Daylighter who everyone wants on their side — can decide the outcome; too bad he wants nothing to do with Downworld politics. Love, blood, betrayal and revenge: the stakes are higher than ever in City of Fallen Angels.

I was so excited to find out there was going to be an additional THREE books to this series. Mostly for two reasons. Jace is perfectly imperfect and the whole Shadowhunter world is amazing. I don't want to post any spoilers, so this review will be a little general and short, but ultimately, I couldn't NOT post a review of this awesome book.
Cassandra Clare's ability to create such a different and specific world is amazing. I never once questioned the powers or norms of this Shadowhunter universe. In fact, I just want to live there. Shadowhunters are completely badass and have such a diverse culture. All of the characters in this book are purely individuals. Jace, oh Jace. So witty, sarcastic, sexy, and amazing. I didn't think I could fall more in love with Jace, but COFA sure did it. I want him to be in every scene ever and even better, I want him to marry me. Clary is cool, but I think I'd rather have him for myself ;)
In short, this book is MAGNIFICENT. Go get it! And the other three! You will not be disappointed, I promise. Once you read it, you will not be able to figure out how you ever resisted the Shadowhunter world in the first place. Hope you guys enjoy!
Posted by Tricia at 6:44 PM 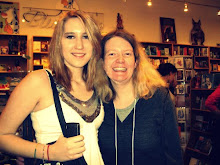 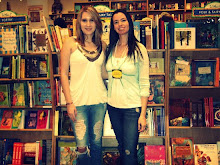